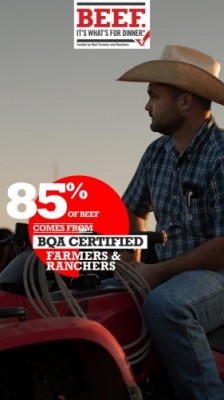 The National BQA Awards annually recognize outstanding beef and dairy producers and marketers. Winners not only demonstrate high-quality animal care and handling principles as part of their day-to-day operations, but express a strong desire to improve their operations through BQA. As good stewards of the cattle industry, a common trait among nominees is encouraging others to implement the producer education program. Award categories include: Cow-Calf, Dairy, Feedyard, Educator, and Marketer, the category for which WVM was awarded.

Founded in 1989, WVM has been a proponent of BQA programs and guidelines for nearly as long as BQA has been around and encourages adoption of BQA practices with its producers, buyers, and auction partners. During broadcast auctions where buyers are limited to seeing video of cattle, having a BQA certification shows that producers follow industry standards for high quality animal handling and health care.

“I can think of few other marketers, sales yards or organizations that serve as industry leaders in the area of promoting the value and importance of BQA to beef producers as much as WVM,” said Jill Scofield, director of producer relations and BQA coordinator with the California Beef Council.

WVM came to be when Ellington Peek and John Rodgers, both veterans in livestock marketing, saw an opportunity to provide customers a new auction format through nationally-available satellite broadcasts. The company is now co-managed by Peek’s children, Brad Peek and Callie Wood. Along with continuing to provide six annual sale broadcasts via satellite through Dish Network, the company streams 12 live auctions on the internet, hosting a sale approximately once per month.

The company partners with 21 separate auction yards and their representatives to market more than 300,000 head of cattle on annual basis on behalf of more than 850 consignors. With video sales, buyers can view cattle from their office or home, and bid for cattle lots by telephone or online. Several in-person auctions are held each year, as well.

In addition to its sales broadcasts, WVM typically publishes an online catalog two weeks prior to its monthly sales. The catalogs contain information about each cattle lot, including whether the cattle are from a BQA certified producer, and links to accompanying video clips of the cattle.

Highlighting BQA certifications along with other quality assurance practices in its catalogs and auctions (including WVM’s own vaccination program which requires BQA certification) is a way for the company to encourage and educate producers about best management practices that buyers expect.

“WVM has taken the lead among a small number of large cattle marketing companies to actively recognize the value of BQA certification among their consignors,” said Dr. Jason Ahola, professor of beef production systems at Colorado State University’s (CSU) College of Agricultural Sciences.

As BQA programs have grown in recognition throughout the United States, WVM has seen that cattle sold by BQA certified producers are more likely to be sold at a premium. The company shared 21 years of data from its sales and catalogs with Dr. Ahola and Dr. Dan Mooney, livestock economist at CSU. Ahola and Mooney studied the data to determine if lots of cattle with a mention about BQA in the description were sold at a premium compared to lots that didn’t mention the certification. They concluded that a significant premium existed when buyers are provided information about the BQA status of the management of a cattle lot.

For WVM, the ultimate goal in this research and in continuing to highlight BQA is to share the benefits that becoming BQA certified can yield for producers beyond being ‘the right thing to do.’

The BQA Marketer Award is funded in part by the Beef Checkoff with additional support from Cargill. Award winners are selected by a committee comprised of BQA certified representatives from universities, state beef councils, sponsors and affiliated groups, who assess nominations based on their demonstrated commitment to BQA practices, their service as leaders in the beef industry and their dedication to promoting the BQA message to grow consumer confidence.

For more information on WVM and other 2020 BQA Award winners, visit www.bqa.org/about/bqa-awards.

About Beef Quality AssuranceBeef Quality Assurance (BQA) is a nationally coordinated, state implemented program funded by the Beef Checkoff that provides U.S. beef producers guidelines and certification drawn from common sense husbandry techniques and accepted scientific knowledge on how to raise cattle under optimum management and environmental conditions. BQA reflects a positive public image and instills consumer confidence in the beef industry. When producers implement the best management practices of a BQA program, they assure their cattle are the best they can be. For more information on BQA, visit http://www.bqa.org/.