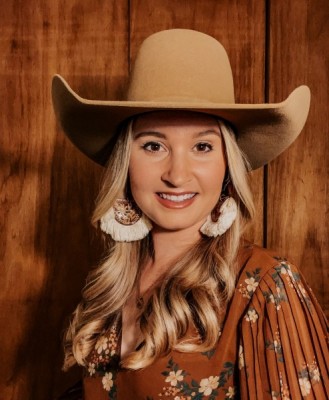 Houston, TX (February 2, 2022)--Markie Hageman has been selected as the 2021 Advocate of the Year for her success in creating social media content that highlights the benefits of beef production, the cattle industry and what it’s like being a first-generation rancher. This award, given by the Beef Checkoff-funded Masters of Beef Advocacy (MBA) program, recognizes one outstanding beef advocate for their success in educating consumers about cattle and beef.

Growing up in Tulare, California, Hageman had dreams of attending the Fashion Art Institute of Design and Merchandising, but her love of animals ultimately sent her on a different path. After her mother pointed out that she couldn’t take her horse to the Fashion Art Institute, Hageman decided to attend Fort Hays State University in Kansas where she majored in animal science and graduated with her Ag business degree.

In 2016, she moved to Alabama with her mother and stepfather, and was exposed to the industry through her stepfather’s cow-calf operation. As Hageman learned more about the industry and attended industry events, she says she felt a spark and saw a great opportunity to grow within the industry and share her passion with others.

Some of Hageman’s first learning experiences in the industry were becoming Beef Quality Assurance (BQA) certified and completing the MBA program. “I credit the MBA and BQA programs for giving me the knowledge and tools I needed to learn and grow as a newcomer to the industry – and to eventually share my story as I progressed through Beef Checkoff-funded advocacy programs and training.”

Using tools and experience from that training, as well as her involvement in the College Aggies Online program, she took her advocacy to new heights with the creation of her social media pages under the name Girls Eat Beef Too. “I used social media for so long but never thought about advocating on it,” said Hageman. “Now I’ve been able to use the platform that I have being a first-generation, small rancher and turn that into a pretty good following.” As of today, she has more than 13,000 followers on Instagram and more than 6,000 on Facebook.

Hageman was also an English teacher but said because her goal is to grow as a rancher, she has no plans of returning to teaching in the future. In her free time, Hageman writes and contributes to several Ag trade publications like Ag Daily, Western Ag Reporter and Beef Magazine, among others.

In 2018, Hageman moved back to California where she bought her first set of cows a couple of years later. She now has her own herd made up of four cows, three calves and one calf on the way. Today, she lives in Hilmar with her fiancé and will participate in NCBA’s new Checkoff-funded Trailblazers program.

About the Beef Checkoff
The Beef Checkoff was established as part of the 1985 Farm Bill. The Checkoff assesses $1 per head on the sale of live domestic and imported cattle, in addition to a comparable assessment on imported beef and beef products. States may retain up to 50 cents on the dollar and forward the other 50 cents per head to the Cattlemen's Beef Promotion and Research Board, which administers the national checkoff program, subject to USDA approval.

About Masters of Beef Advocacy (MBA)
The Checkoff-funded MBA program was launched by the National Cattlemen's Beef Association, a contractor to the beef checkoff, in 2009. The program, with over 20,000 participants, is designed to equip advocates to engage in conversations with consumers about beef and how cattle are raised. Applications to participate can be found at MastersofBeefAdvocacy.com.